Please enable JavaScript, then refresh this page. JavaScript is required on this site.
Last week I attended a seminar put on by Lee McPheters with the W.P. Carey School of Business at Arizona State. I took this seminar as part of my continuing education to maintain my C.P.A certification. Although he started the session saying that the outlook is not doom and gloom, when I left 2 hours later, I was significantly depressed. As most people know, economists agree that the U.S is now in recovery mode. Here is a graph showing the GDP growth rate for the last several quarters. 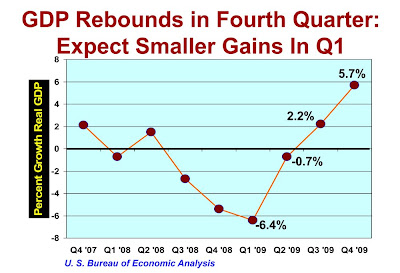 So, if our GDP is growing, why the doom and gloom.  Well, to start with his projections show a .5% increase in unemployment for the year in the U.S. (-1.0% in Arizona). So it looks like the recovery is not going to be employment based. His overall GDP growth rate for 2010 for the U.S. is predicted to be about 2.5%.  This tells me that the sales that we experienced in 2009 will repeat, at best, in 2010.  If you are planning on significant growth in 2010, you are fooling yourself. 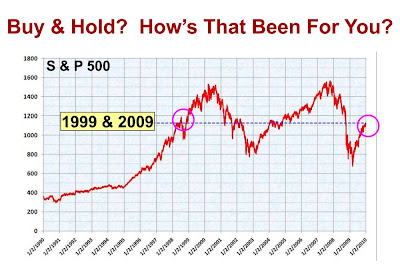 That’s right, the S&P 500 Index is where it was in 1999. All of the stock market gains we experienced in the 2000 decade have all disappeared.

How has employment held up for the last decade? 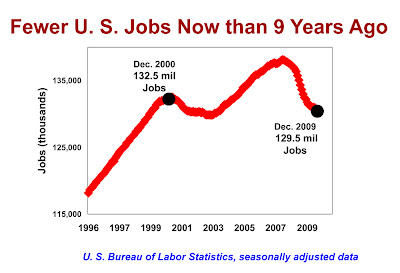 Lee also spoke about the U.S. savings rate.  Our savings rate over the last couple of years has increased to 5.9% of earnings, which sounds great.  However, 70% of our economy is consumer driven.  For each 1% increase in the savings rate, about $100 billion is removed from the economy.  We need the consumer to become comfortable with their position in life and start spending again.

How do you feel about the recovery.  Well, 65% of people who were polled stated that the recession is not over.  In fact, what a lot of economists have stated is that the increases in the GDP that we have seen have been caused by two main reasons.  First, manufacturers have decided to bring their inventory levels back up to pre-recession levels and that is thought to be a temporary measure.  The second reason stated is that the stimulus monies are having a temporary effect on business activity (though you could not tell it by me).

When Will the Full Recovery Happen?

So what is the timeframe for a full recovery?  Can you believe 4-5 years.  2014 is the year we may be able to celebrate and say that everything is back to pre-recession levels.  The official recession lasted 21 months where the average recession in the past has lasted 10 months.

The recession in Arizona has been significantly worse than the rest of the U.S. and the recovery will follow the U.S. In the past, Arizona has shown significantly wider variations in growth and contraction rates and will probably show a higher growth rate when we finally start to come out of this.

After hearing all of this (and more), I have the following thoughts about going forward as a small business in Arizona:

Everything that you wished you had done to make 2009 a better year, do it in 2010:
If you wished that you had reduced your costs sooner or to a greater extent, make sure you make those reductions now.  2010 will not show a significant increase in revenues and your expenses will continue to grow if you do not take measures to control them.

Hire back slowly:
Be slow to fill new or empty positions with full-time staff.  Now is the time to have a plan on hiring temporary and part-time employees.  Have a good agency ready to fill temporary needs.

Explore alternative financing options:
The availability of conventional credit lines will continue to dry up for small businesses.  Even though there is a great amount of discussion about having the banks open up their lending, they still have to deal with financials that reflect two years of losses and reduced balance sheet health.  It is time to start looking into the SBA programs again and what they may have.

Start innovating again:
It seems that lately, Google and Apple are the only companies that continue to innovate (if you call the iPad an innovation considering it looks like an oversized iPhone without calling capabilities). Its time to look at your business and figure out what it is going to take to make it a profitable enterprise in this next decade. I know its hard to think about the future when you are fighting the current battles, but it is imperative to the future of your business and the economy that we start innovating again.

Make the hard decisions:
You know which ones they are.  From letting people go, to closing down an unprofitable branch, to selling off an unproductive asset or to getting another job.  These are hard times and the people who are able to make the hardest decisions are the people who come out ahead at the finish line.

There you are.  Now doesn’t everyone feel better?

You can reach us at AlphaGraphics at the following websites:

All Posts
Founded in 1970 in Tucson Arizona, AlphaGraphics has grown to a worldwide company with more than 260 independently owned and operated business centers dedicated to drive results for their clients. AlphaGraphics is a global leader in marketing and print communications and is your one-stop shop for all of your marketing and printing needs. Create and send targeted direct mail campaigns, brochures and every door direct mail pieces or producing mobile sites, email campaigns, posters and window cling. If you’re looking to increase your reach, contact your local AlphaGraphics center to learn more.
AlphaGraphics Mesa on Baseline
535 W. Baseline Road, Suite 104, Mesa, AZ 85210
alphagraphics.com
(480) 844-2222
Contact Us